Memorial Community Church is a local landmark in Plaistow, in east London. At the very top of one of its two towers is a chime of ten bells that were installed in 1925 to remember those who died serving in the First World War. The names of 197 local men are cast into the bells. 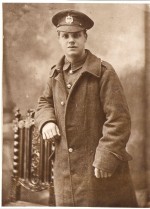 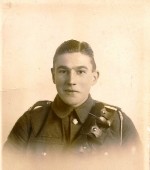 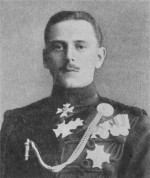 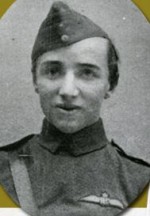 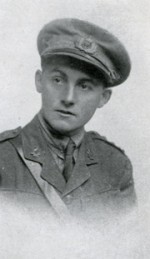 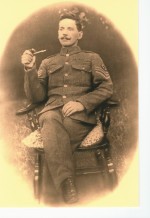 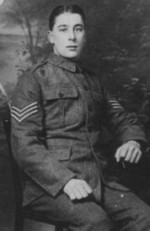 Thanks to Lorraine Melanaphy, niece of James Varley, for the photographs and information about him.

His siblings were; Jessie, Annie, Florenze, John, Henry and Thomas.

His father, also named James, worked as a steam sawyer. He also taught boxing at the club next to the Black Lion in Plaistow, and before that taught some well known boxers such as Tommy Baldock in his own home at Kelly Road.

Jean Conners, a great-niece of Albert Acton, provided the following information and the photos of Albert Action, adding, “along with so many others it was such a sad loss of such a young life. My Mum used to tell me that Albert’s family were a nice family and she could even remember attending her Grandmother Susan’s funeral”.

The facts as known at present

According to a later Schools Admission Register[1] Albert Edward Acton was born on the 13th March 1898 to Thomas and Susan Acton (nee Fisher).  Albert was the youngest of their seven children.  He was indeed the “baby of the family” as his eldest brother Thomas had been born 23 years earlier, in 1875, Emily, William[2], Alice, Florence, Constance followed and then Albert himself.[3]

The 1901 Census shows the family to be living at 5 Westwood Road, Silvertown.  By the time that Albert was admitted to West Silvertown School, in Boxley Road, the family’s address was given as 21 Westwood Road.  The family was living in rented accommodation at a time when it would have been very easy to move, if a property became vacant that suited their needs more appropriately.  The Register also states that Albert left the school on 13th March 1912, at the age of 14.

The 1911 Census showed that just Albert his sister Constance and their parents were living at number 21 by this time, where they occupied just three rooms.  It is known that his brothers and sisters all survived to adulthood, some already having married by 1911.

Unfortunately to date it is not known what Albert’s employment was between this time and his enlistment into the Army at Woolwich[4] .  Albert in his new uniform left a lasting impression on my late Mother as, although she could have only been about four years old at the time, she remembers seeing him and his friend in their uniforms “of which Uncle Jack was so proud.”

As shown on your website Albert died of his wounds on 14th September 1917, aged just 19, and is buried in Plot 8 Row B, Grave 12, of Dozinghem Military Cemetery, Westvleteren, Belgium.  What is so poignant is that according to the National Probate Calendar, Albert, along with many other servicemen were encouraged to make a will.  The extract from the Calendar is attached.  (The Susan referred to is Albert’s Mother)

What is also unbearably sad is that Albert’s Father Thomas had been killed on the 19th January of that same year in the “Silvertown Explosion” at the Brunner Mond & Co. Chemical Factory.  Although Albert’s Mother, Susan, did not die until 1923 family stories tell of her never being the same after the death of her husband and youngest son and that she died “of a broken heart.”[5]

[2] My Grandfather whom I unfortunately never knew as he died in 1942.

[3] According to my Mother and a relative in Australia Albert was known as Jack but nobody knows why.

[4] I do have details of this somewhere(!) will send them on when I find them.

Clearly not a Local Hero, this youngest grand-child of Queen Victoria was the only member of the royal family to be killed in the war, and that is why his name is included. The church and mission had been honoured by visits from Queen Mary before and during the First World War, and the ‘royal connection’ continued with HRH Queen Elizabeth the Queen Mother remining patron of West Ham Central Mission until her death and visiting Plaistow in the 1980s.

During the First Battle of Ypres on the 27th of October 1914, the first battalion of the King’s Royal Rifle Corps crossed from Zonnebeke to Broodseinde, to stop the German infantry on the Keiberg. Prince Maurice Victor Donald van Battenberg was lieutenant and commanding officer of the second division of the battalion.

The enemy could see the troops come nearer, but they postponed the attack until they were really close to their position. As soon as the troops had crossed the stream the ‘Heulebeek’, the enemy opened fire from their position on the Keiberg with light weapons and small cannons. There was no escape. The Prince was mortally wounded by shrapnel. The platoon sergeant tried to offer help to the wounded Prince, but to no avail. He died before his men could bring him to safer quarters. The Prince died at the age of 23.

Lord Kitchener suggested the body of Prince Maurice be brought to England, but his mother, Princess Beatrice of England, refused because she knew that her son would have wanted to be buried with his friends. He was buried on the municipal cemetery of Ypres. His tomb is located among civilian graves, right next to the entrance to the British Cemetery Extension.

Hugh Marnham is also remembered on the Mill  Hill School Roll of Honour, http://www.milllhillatwar.org.uk/ which has this extract from letter from Major W. J. S. M., No. 10 Squadron, R.F. C. :

” Your son was one of our best pilots, and was one of the cheeriest, pluckiest fellows I have ever met- always smiling and always ready for anything. We all feel his death very deeply. It leaves a vacancy that will be very hard to fill.”

His mother had opened the new church building in 1922, and dedicated the bells as a war memorial in 1925.

His brother Percy was also killed in the war.

He is remmbered on the Mill Hill School memorial www.millhillatwar.org.uk from which this is taken: An officer who knew him well wrote:-“I met him out here shortly after he landed from Gallipoli.  He was his old cheery self, but yet I noticed a difference. He had become more serious and responsible looking, and as we talked and laughed over the good old tennis days, he struck me as a Boy who knew what he might have to go through, but had made up his mind to go through with it with a brave and stout heart and a cheery face. He did.”

Thanks to Paul Cavedasca, great-grandson of John Richard Cavedasca, for the photograph of him.

There is a photo of J R Cavedasca’s memorial stone in the East London Cemetery, from the War Graves Photographic Project,  here: http://twgpp.org/information.php?id=3156734 and another here.

The inscription on the bells says Private W Venus.

However William Venus, the eldest of six brothers, five of whom served in the First World War, was not killed in the war but injured in the arm – possibly losing an arm.

Two of the brothers, Sidney Ernest and Leonard, were killed. We don’t know which of these is referred to on the bell, or why there is only one. There are profiles for both of them on this website.

Thanks to several members of the family for providing information and photographs.

The inscription on the bells says Private W Venus.

However William Venus, the eldest of six brothers, five of whom served in the First World War, was not killed in the war but injured in the arm – possibly losing an arm.

Two of the brothers, Sidney Ernest and Leonard, were killed. We don’t know which of these is referred to on the bell, or why there is only one. There are profiles for both of them on this website.

Thanks to several members of the family for providing information and photographs.

Ivy Patterson is a longstanding member of Memorial Community Church, interviewed by Hilary Colston in 2011. ‘Horrie’ Patterson was the brother of her husband.  Ivy’s husband was the youngest of 13 children in the family, while Horace was the oldest.

Ivy’s mother in law was a member of the women’s meeting which met on Mondays. She had memories of Dame Clara Butt visiting, as well as Queen Mary. Her father-in-law was a soldier and biscuit maker, who had moved with other in his family from Colchester to  East London. They were married and lived initially in Bromley-by-Bow, and at the time of the 1901 census they were living in Kent Street, West Ham. By 1918 the family lived in Hollybush Street, Plaistow.

Additionally in the Church Messenger, the magazine the Baptist church produced at that time, is a note that H Patterson received a parcel for Christmas 1914.

Horace married Violet Evangeline on 12 January 1918 in West Ham registry office.  He was killed in action in August of that same year in the  ‘Advance to Victory’.

From Barry Langridge’s research on the men of the Rifle Brigade:

Harry Patterson enlisted in September 1914, 13th Battalion, Rifle Brigade. He was killed in Action on 24 August and awarded the Military Medal on 24 January 1919. The award would have been for gallantry in August 1918.

No citations are available for the award of the Military Medal but it is likely that CSM Patterson’s act of gallantry was performed during the attack on the German-held village of Achiet-le-Grand which is some four miles northeast of Bapaume (Somme).  CSM Patterson was killed during this battle.

Many thanks to two other members of  Horace Patterson’s family who have provided lots of information from their family history research to fill in this story. Some details have been included above, and there is more in the comments section below.