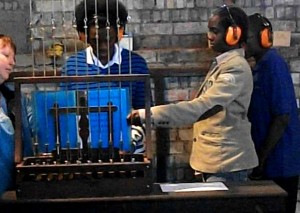 Learning to play the bells

Between May and November 2011,  urgent repairs were carried to the eroded brickwork and failed flat roofs of the Bell Tower at Memorial Community Church, Plaistow, to stop rain getting inside.

At the same time we decided to restore the Memorial Bells, and try and make local war memorial – tucked up high in the roof of a church – better known, especially to local people and to people who might have a relative commemorated on the bells.

So as well as restoring the bells we had the belfry staircase made safe so that visitors, including school trips, can see the bells, and lights were added to illuminate some of the names on the bells.  A ‘virtual tour’ means that people who can’t get up the stairs to the belfry can still ‘see’ the bells. Four young people have learned to play, and the bells are going to be rung on Sunday mornings and special occasions.

Some work had already been done to identfiy the local men named on the bells. Once the smaller bells were taken down and a full list of the names on them created, this research continued. Most of what we know so far has been added to this Local Heroes website which we hope will be found by people researching their family history who may discover the name of one of their ancestors  written on the bells.

A local history club called Historica Apus, based at The Swift youth club in Plaistow, held workshops in photography, illustration and design leading to some of the pictures you can see on this website and the exhibition that is on the ground floor of the church. The Local History Group at The Hub in Canning Town, the East Ham branch of the Royal British Legion, the Essex branch of the Western Front Association and Kaizen Primary School have all been involved with this, as well as volunteers from the church and Newham, notably Hilary Colston and Paul Darran.

There is still much we don’t know about most of the men who are remembered on these bells, so this is very much a work in progress.  Please do get in touch if you are able to help fill in the stories of these Local Heroes.