The borough of West Ham escaped largely undamaged from air raids during the war.

The biggest disaster to strike on local area was the explosion of the Brunner Mond Chemical factory in Silvertown. It had originally produced caustic soda. After the outbreak of the war and with pressure from the government it switched production in 1915 to TNT, despite the fact it was in a heavily built up area. So in 1917 the factory was producing TNT for use in high explosive bombs.

On the night of 19 January 1917, the factory exploded. It is believed the explosion was caused by a fire in the “melt pot” room. The explosion was heard 100 miles away. It devastated the area and damaged thousands of homes. The factory itself, the local fire station and other local factories were completely destroyed. Sixty-nine  people died in the explosion with four others dying later. 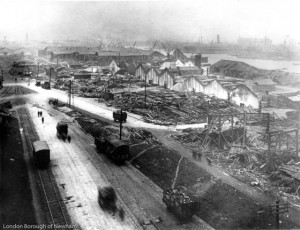 After the Silvertown explosion. On 19th January 1917 at 6.52pm 50 tons of TNT blew up at the Brunner Mond chemical works, which had been converted to munitions production to help the war effort. Seventy-three people died and over 300 were injured inthe blast.