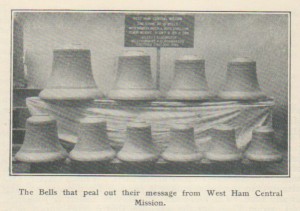 On these pages are extracts from the archives of the church and West Ham Central Mission talking about why they wanted to have these bells as a war memorial, and how they raised the money and finally had them installed in the church tower. 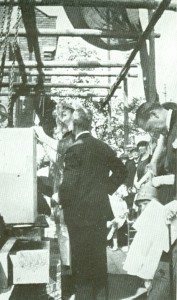 Laying the memorial stones as the church was being built

building, which was finally started after the war in 1921 and completed in 1922. The whole building is a memorial to the people who died in the Great War, and there are plaques inside and foundation stones around the outside to say this.  But the bells are especially dedicated to the individual men whose names are on them.

The people who ran the church, particularly Revd and Mrs Rowntree Clifford were quite forward thinking – the church also has a projector room so it the auditorium could be used for films as well as church services. The chime of bells chosen for the church was the “new, European style of bell” rather than the traditional English church bells played with ropes, which at the time was seen as a great innovation in the world of bells. Although unusual in British churches, they are found in civic buildings and are more popular in France, Belgium and other parts of the world.

Bells are often dedicated to the memory of someone and there are several “War memorial carillons”  – a carillon is a much larger chime of bells  – for example in Loughborough, UK, and Wellington, New Zealand. The website of the New Zealand National Memorial says:

“Originating from Belgium, the Netherlands and northern France, many carillons were confiscated and melted down for armaments in World War I and hence their peace time resurgence and association with war memorials”.