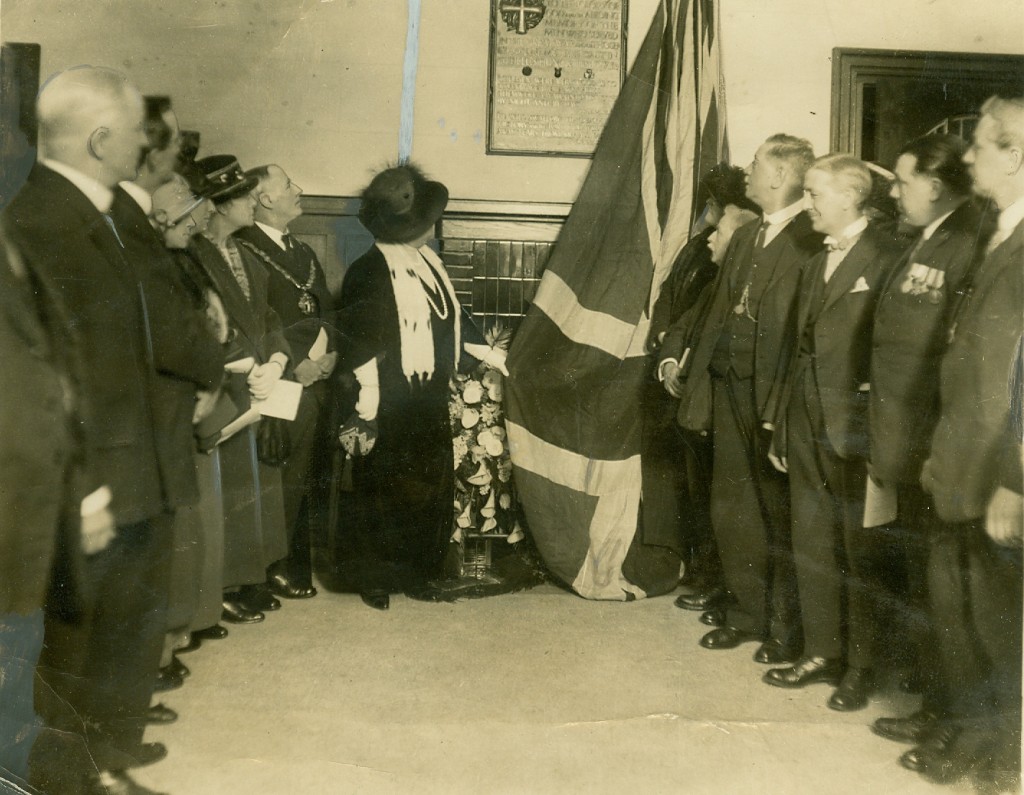 The dedication of the Memorial Bells by Mrs Edmonson, 14 March 1925

‘After the remembrance tablet had been unveiled, buglers sounded the Last Post, and then Mrs Edmondson set the bells ringing.  A chaplet of white lilies and roses “with the undying love of the mothers,” and a wreath were placed at the foot of the tablet.’ 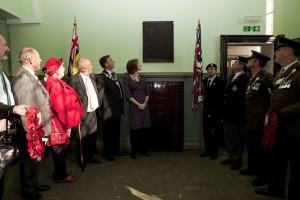 The re-dedication of the bells on 19 November 2011, photo David Levenson/Heritage Lottery Fund

Here is the full description of the dedication of the bells as a war memorial, taken from the 1925 Annual Report of the West  Ham Central Mission, used with thanks to WHCM:

DEDICATION OF THE BELLS

The dedication of a carillon of ten bells – the largest weighing 91/2 cwt. – installed in the East Tower of the new Memorial Church, took place on Saturday afternoon, March 14th, 1925, as a War Memorial.

The chime is worked by an electrically-driven pneumatic machine, which is set in motion three times daily by means of a clock, and paper rolls similar to those used on a pianola will supply whatever tunes are desired. A hand clavier, also attached to the bells, makes it possible for them to be rung at any time.  The bell founders, Messrs. Gillett &amp;amp;amp; Johnston, of Croydon, claim for the invention that it represents a revolution in the bell world.

The Rev. R. Rowntree Clifford, Superintendent of the Mission, officiated. Having welcome the Mayor and Corporation, the local members of Parliament, and the 6th Battalion Essex Territorial Regiment  (in the charge of Lieut. S. O. Ellis), Mr. Clifford said that some five years ago the Church and congregation decided to commemorate the service and sacrifice of the men who fell in the great war by installing a carillon of ten bells.  The bells, with the names of 200 men inscribed on them, were being dedicated that afternoon.  It was interesting to mention that there was but one name on one of the bells – “The Unknown Warrior” – representing all the men of West Ham who made the supreme sacrifice.  Another bell had upon it the names of Prince Maurice (son of Princess Beatrice), the only Royal personage who fell in the war, those of Mrs. Edmondson’s two sons, and also the name of the son of Mr. Marnham, their Building Fund Chairman and Treasurer.  Time did not permit him to enumerate the names of the other gallant men which were to be found on the eight remaining bells.  They were directly or indirectly associated with that Mission.  A remembrance tablet in the lobby would be unveiled by Mrs. Edmondson “To the glory of God and in abiding memory of the men who served in the Great War, and of those whose names are cast in the bells.”  The installation of these bells marked the completion of the scheme for that noble sanctuary, and they had therefore placed three other tablets in that fine and wonderful building. These were to mark the opening of that Memorial Church by Mrs. Edmondson on September 21st, 1922; the noble service of those who enabled it to be opened free of debt, and the generous gift by Dame Clara Butt of their magnificent organ.

The message of the Bells

“We are engaged to-day in a unique service,” said Dr. J. C. Carlile, C.B.E., who in the absence through illness of the Rev. Principal Bloomfield, B.A., B.D., of Leeds, gave the address. He said: “It was a very beautiful idea that you should erect a peal of bells in this district.  I confess to a love of bells.  I love all sorts of instruments, even the national instrument of my own dear land, Scotland, but I love that best at a distance.”  Dr. Carlile, who lost his only son in the war, went on to say that in placing on the bells the names of the men who made the supreme sacrifice, they  had set their sorrow to music and moulded that sacrifice in song.  It was an audacious thing to do, but the supreme secret of the Christian religion was that it took the sting from sorrow and misery and suffering, and literally found a joy in these things.  He rejoiced with them in their lovely conception of turning their sorrow into song.  They remembered the message that the bells of Bow rang out to Dick Whittington, and they remembered the message of the bells of St. Clement’s.  What would be the message of the bells of West Ham?  He wondered if to some it would be “Christ is come to bless us every one”?  He prayed that it might be; that to every woman in grief they would say: “Let not your heart be troubled; ye believe in God, believe also in Me!”  and that to the boys and girls who were without fathers the message would be “I am the Father of the fatherless.”  He trusted that they would convey something of the love of God, and that to men and women there might come joy and encouragement in the sound of the music whenever the bells rang.  It was a great day for the people of that district, and something that was in the nature of a romance in modern religious organisation.

The prayer of dedication was offered by the Rev. W. S. Lord, and a passage of Scripture was read by the Rev. C. G. Hutchison.  Two hymns, “Ten thousand times ten thousand” and “For all the saints,” were sung, and Captain Kennerly Rumford (husband of Dame Clara Butt) delighted the congregation with his renderings of “There is a green hill” (Gounod) and Martin Luther’s Nativity Hymn, “The Holy Child.”

Before proceeding to the lobby of the Mission, Mrs. Edmondson addressed the congregation from the pulpit.  “We have gathered here,” she said, “to do homage to our glorious dead, and I would like to say how glad I am to have the privilege of unveiling the tablet and ringing the bells to the memory of those, who in the flower of their manhood, poured out the sweet red wine of youth for our sakes, and for our children’s children.  Their memory is fragrant with the incense of sacrificial love.  For many years I have felt the keenest interest in the work of this Central Mission.  I have always felt that missions of this kind are the safety valves of the nation.  I am glad to be associated with you in the culmination of your great and wonderful scheme, which is beautiful in its conception, and a fitting and noble memorial to those who have done so much for us.  I am happy to know that my own boys’ names are associated with the broadcasting of God’s message of love over this busy place.  I cannot help thinking that ours is a triumphant note to-day, for when our boys took Heaven by storm they found themselves at home in the Father’s Presence.”

After the remembrance tablet had been unveiled, buglers sounded the Last Post, and then Mrs Edmondson set the bells ringing.  A chaplet of white lilies and roses “with the undying love of the mothers,” and a wreath were placed at the foot of the tablet.