At the start of the 20th Century East Ham and West Ham were separate boroughs. West 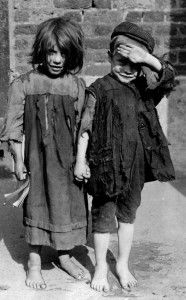 The period between 1900 and the outbreak of the First World War was difficult for workers in the area. Increased use of machinery meant fewer workers were necessary and the jobs they did do became more repetitive and boring. As so many workers were available it was often easier and cheaper for employers to take on workers by the season or day. Many only got work a couple of days a week and this put enormous strain on family life.

The high levels of unemployment led West Ham to become the first borough to introduce the Unemployed Workers Act in 1905. They set up  a Distress Committee to try and solve unemployment.  The most controversial scheme encouraged the unemployed and their families to emigrate to Australia or Canada. In 1906\07 the number of those taking up the offer reached 224 men and over 800 dependants!

Labour yards were set up by charities so that unemployed men could earn a few shillings a day by chopping firewood for tinder. The West Ham Central Mission paid 2 shillings a day in 1910. It was not very much but helped keep families out of the workhouse. Sometimes the yards operated soup kitchens for women and children too.

There was a track for cycle and motor cycle racing in West Ham Memorial Park, and in 1917 there were 17 cinemas in West Ham.

The 1911 census records that 1.5% of West Ham’s population were not British. Most were Europeans with a smaller number of people from Asia, Africa and elsewhere. By the 1920s most of the shops in Barking Road were owned by Europeans.

West Ham, like elsewhere in the country, suffered from food shortages, deprivation and the fear of attack from the air.

Unemployment was a huge problem. By 1925 over 70,000 people in the borough were receiving poor relief. There were strikes and demonstrations.

After the First World War more black and Asian people began to settle particularly around the docks in Canning Town. Some black troops were demobbed here and decided to settle. Many more were sailors particularly from India and the West Indies who met and married local white women. In 1921 1000 people of Indian birth were registered on the census as living in the area. By the 1930s the black community in Canning Town was thelargest in London. There was also a small Jewish community in East Ham.

Thanks to  Newham Heritage for this content taken from the Newham Story website, and WHCM for the photo.