This page tries to put the stories of the 200 men commemorated on the bells in Plaistow in context. 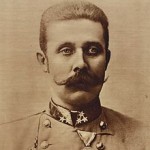 The war began on 28 July 1914, triggered by the assassination of Archduke Franz Ferdinand. At first people thought it would be over by Christmas but all the world’s major powers were drawn into the first World War. You can see how that happened on this 1914 timeline.

The combination of modern weapons and old-fashioned tactics caused terrible casualties. By the time the war ended on 11 November 1918 it had involved over 60 million military personnel, and over half of them were either killed, wounded, taken prisoner or missing. The number of military deaths is reckoned at at least eight million.

From the borough of West Ham, 100,000 people served in the armed forces in the First World War.

There are lots of great sources of information about the First World War such as the BBC website and the National Archives.