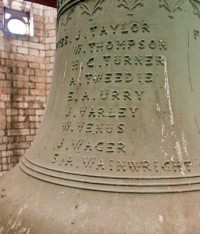 Bell has Private A Tweedie, but this seems the most likely identity of this hero. Two other ‘Privates’ on this bell actually seem to be Corporals.

The Tabernacle Messenger (the church magazine of the time) has:

No photos found for Alexander Tweedie

Do you know anything about Alexander?

Perhaps Alexander Tweedie was in your family, or a friend of someone in your family? If you have any information at all we'd love to hear from you. Post a comment using the form below and we'll be in touch.