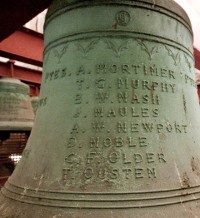 Probably the brother of Frederick Mortimer, Albert George Mortimer served in the 4th Battalion of the Grenadier Guards.

This is the first time so far that we have found the names of two men from one family on the bells; in several cases only one of the brothers is named. But Albert and Frederick Mortimer had a third brother Henry who also died in the First World War, on 23 Mar 1918. He was apparently married just before dying. Frederick and Albert do not appear to have graves so that could possibly be why they were commemorated her, but we don’t know.

Thanks to Roger F Mortimer of the Guild of One Name Studies for identifying this man and providing details about him and his brothers.

Do you know anything about Albert George?

Perhaps Albert George Mortimer was in your family, or a friend of someone in your family? If you have any information at all we'd love to hear from you. Post a comment using the form below and we'll be in touch.