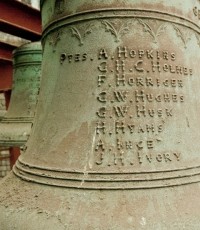 Served previously in France from June – October 1917, being wounded in the foot in September 1917.

Thanks to Heather Wright, who commented (below), “On my mother’s side of my family James Henry Ivory is my 1st cousin twice removed. I was fascinated to find out he was a tattoo artist, married to a tattooed lady.”

This photo (taken from an online auction catalogue) appears to be of Ethel Ivory, tattooed by her husband. It would be interesting to know in what way they were connected with a Baptist church. From correspondence from his widow regarding his medal, it appears she emigrated to Australia after his death.

And thanks to Bria Membry for this additional information on Ethel and their children:

“Ethel Florence Ivory did migrate to Australia with her three children, arriving in Melbourne in October, 1921 via s.s. Berrima. She took up residence at 15 Milton-street, Preston (shown in Commonwealth War Graves Commission records), but switched to 6 Milton-street in the late 1920s. She died there in 1940 … “IVORY.— On July 21, at her residence, 6 Milton-street, Preston, Ethel Florence, beloved wife of the late James Henry, and loved mother of Ethel (Mrs. Holt), William, James, Florence (Mrs.
Bradshaw) and Queenie (Mrs. J. Moate), aged 71 years, interred Preston General Cemetery”.

I have seen no record of the William mentioned in the Notice, presumably the eldest and perhaps remaining in England.

Her late husband, James Henry appears on the Australian War Memorial Commemorative Roll which records deaths of Australians who were serving in armed forces of other countries, but I can find no trace of his birth in Oz and it may be that whoever compiled the Roll assumed a local birth based on his widow’s later address.”

Do you know anything about James Henry?

Perhaps James Henry Ivory was in your family, or a friend of someone in your family? If you have any information at all we'd love to hear from you. Post a comment using the form below and we'll be in touch.